Does your organization have an older system that's still mission-critical, but you're having trouble finding support for it? Dave McGuire, the core of MSS, has a passion for vintage technology. (In fact, separate from MSS, he has even opened a public computer museum!) MSS is able to provide support for many older computer systems, including data acquisition and industrial/laboratory automation systems. We're not talking about last year's Windows box, we're talking about stuff like PDP-11 minicomputers.

MSS is able to provide support for high-end but older scientific, industrial, and test equipment. Bus interfaces for 'vintage' computers, virtualization and encapsulation of vintage operating systems on modern hardware, data converstion, preservation…these are all things that MSS handles. The MSS lab has a lot of this type of equipment, maintained here for Dave McGuire's personal interests as well as to provide support to customers in tough situations.

These days, with budgets tighter than ever, it's important to get as much useful life out of equipment as possible. Further, with the heavy “cost optimization” that has become pervasive in the instrumentation industry, older instruments in many situations outperform their supposedly “improved” replacements. In many cases, the only “improvement” is the profit margin for the manufacturer.

CAMAC (Computer Assisted Measurement And Control) is an IEEE standard that describes a digital data bus and module form-factor for data acquisition and control equipment primarily for use in the nuclear physics world, but it's very general in nature and can be used for all manner of things. Though it dates back to the 1970s, some manufacturers (though admittedly few) are still making hardware for CAMAC crates (the enclosures that hold CAMAC modules) using modern technology. CAMAC is extremely flexible and general, and by nature it is not dependent upon any particular computer platform or operating system. This has contributed to its longevity, especially in industries that understand what vendor lock-in is and know why it's dangerous. One can connect to, and make effective use of a CAMAC system from a 45-year-old PDP-11 or a modern Raspberry Pi with equal ease and efficiency.

MSS has designed custom CAMAC modules for clients in the physics research space. 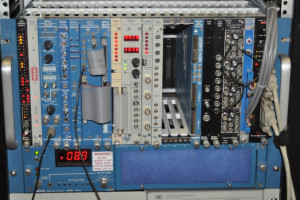 NIM (Nuclear Instrumentation Modules), also an IEEE standard, is similar to CAMAC but the bus carries only power, no data or signals of any kind. Since the 1970s, many companies have built many different types of things into NIMs. Like CAMAC, its use has dwindled today, but some companies still make NIMs using current technology. NIMs plug into a NIM Bin which supplies power and contains the modules.

NIMs are available to perform such functions as signal amplification, pulse height or width characterization, nuclear data acquisition (using an external bus interface), and pulse counting/rate measurement. All of these functions are very common in nuclear studies, but are useful in other areas as well. 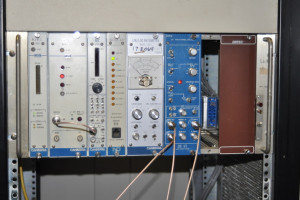